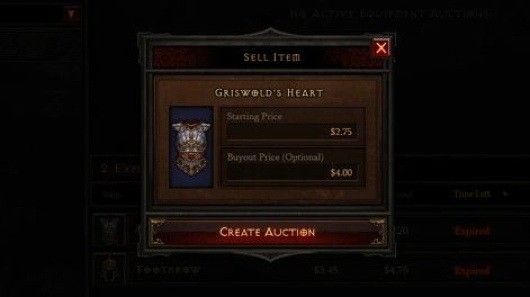 Diablo 3 may be the most anticipated PC game of all time, but, as it turns out, it will implement one of the most loathed concepts in PC gaming – a system where you can pay real money for in-game loot. Blizzard announced today that Diablo 3 will contain an in-game auction system where players will be able to buy and sell items with their hard-earned cash.

The system will work much the same way Ebay does – the seller will pay a fee to list the auction, and another fee when the auction ends. The buyer will pay the seller for the item, and the seller will keep all the remaining money once Blizzard’s fees have been covered. Once the auction is over, and you’ve collected your money you can choose to keep it in your account and use it toward purchases of other Blizzard products, or you can cash out. Cashing out will, of course, result in another fee.

Alright, before you light that torch and start swinging that pitchfork around, Blizzard actually had a good reason for making this decision. Diablo 2 items still sell well on Ebay, meaning that people will buy and sell in-game items with real money whether or not Blizzard facilitates the transaction. By implementing an in-game auction house that uses real money, Blizzard is simply providing players with an easy and secure way to do what they’re already doing.

Diablo 3 will feature some extremely robust PvP gameplay, and that makes the in-game auction house hard to swallow. There’s no question that a player with great loot will have an advantage over their opponents, and as such, it’s hard not to see the real-money auction house as a way for players with some extra cash in their pocket to pay for victory.

So, what do you think? Is Blizzard just offering their customers a feature they want, or are they selling an unfair advantage to players willing to fork over their hard-earned money?

3 thoughts on “Who Wants to Buy My Diablo 3 Loot?”