Despite the luxurious three figure income that freelance writing provides, I still find myself seeking side work from time to time. Fortunately, I’m not just a snarky writer, I also happen to be pretty good at fixing broken electronics as well. I often post my repair services on Craigslist, but recently I’ve noticed a lot of my ads for Xbox 360 repairs getting flagged down. Given the fact that I don’t offer any modding services that violate the Craigslist terms of service (and the law for that matter) I was surprised my listings were getting taken down. I was even more surprised when I saw listings going down within minutes of going live on Craigslist.

After this happened a few times, I decided to check out the policies governing flagging on Craigslist. From the Craigslist page that explains flagging:

Based on that description my assumption was that multiple users had to flag a listing down in order to get it removed from the site. After Googling around for a bit, I discovered that several autoflagging programs are available for purchase, and they make it really easy for one person to get a posting removed from Craigslist. Autoflagging software connects to a proxy server, flags the posting in question, switches proxies, flags the listing again, and repeats that process until the listing goes down.

With this new-found knowledge I was certain I had cracked the case. Obviously, another repairman was using an autoflagger to remove my listings. After contacting a few other local repairmen in an effort to find the culprit, I found that I wasn’t the only one having this problem. At least two other repairmen were going through the exact same thing, so we all contacted Craigslist about the issue. Craigslist never responded to me (or the other repairmen), so I decided to dig a little deeper.

I started adding tracking code from Stat Counter to each of my posts in an effort to track down the flagger. There are a couple of ways to determine which users are the ones doing the flagging. The last person to visit a listing before it goes down flagged it down, and there’s a good chance that anyone visiting a listing multiple times in less than a minute flagged it down.

I was completely surprised at the results I got from Stat Counter. It turns out that one single person making no effort to disguise their IP address, or location was responsible for almost every flag. In fact, it appears that all they have to do to get a listing removed is flag it over and over again. 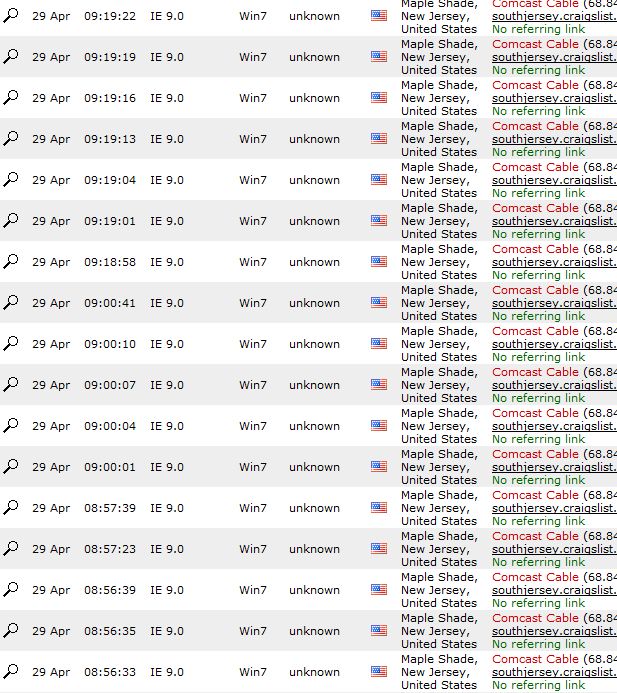 I contacted Craigslist with this new found information, but I never received a response. No system is perfect, but it seems that it should take more than one flagger to get a listing removed from Craigslist. The current flagging system leaves the door open for a great deal of abuse. Anyone looking to bump competitors off of Craigslist can do so with minimal effort.

So, what’s the solution? Unfortunately, I don’t have an answer to that question. Every time a listing goes down in this manner, I contact both Craigslist, and the flagger’s ISP with all of the relevant information, but it seems like neither is willing or able to do anything about it.

192 thoughts on “So How Does Craigslist Flagging REALLY Work?”